Concert in the Kaisersaal Concludes the Heiligenkreuz Abbey Music Academy 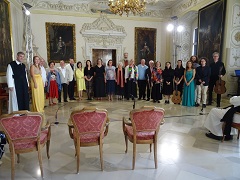 We have received the following from Pater Roman Nägele OCist (Stift Heiligenkreuz, Österreich):

The goal of the Academy is to make works from the archive of Ferdinand Rebay (1880–1953) known.

As a boy, Rebay sang in the Heiligenkreuz choir and a large part of his personal papers ended up at the Abbey. They were uncovered by Custos P. Roman Nägele OCist and were arranged and cataloged by Dr. Maria Gellew.

It is increasingly the case that beautiful and significant pieces can be found among his over 700 works, especially those for guitar and flute.

One of our instructors, Thomas Müller-Pering (guitar), and his students delighted the audience at the closing concert on Sunday, September 5, 2021, in the Kaisersaal of the abbey, along with flutists led by instructors Chia-Ling and Wolfgang Renner. The singers came from the voice studio of Alexander and Jeannie Mayr.

The Brazilian guitarist Luiz Mantovani will produce a music video with featuring a Rebay sonata for solo guitar at the beginning of 2022 at Stift Heiligenkreuz.