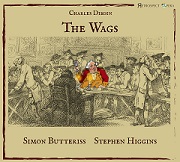 We have received the following from David Chandler (Retrospect Opera):

Charles Dibdin’s The Wags (1790) was by far the most successful of his celebrated one-man shows, or, as he liked to call them (developing the idea of tabletalk), “Table Entertainments.” As the leading singer-songwriter of his era, he would stand behind a piano, alternating speaking and singing to his audience, bringing a wide range of comic characters to life. Dibdin published most of the songs individually, and as he would often refresh his successful shows with new songs, the number of published songs often greatly exceeds the number of songs that would appear in a single rendition of the entertainment. In a typical performance he would sing around 18 songs, a few of which would probably get encored. In total, Dibdin published 37 songs as from The Wags.

Although Dibdin published the songs, he did not publish the spoken parts of the Table Entertainments. For this reason, it has sometimes been suggested that the shows as a whole are unrecoverable. However, there is a mass of manuscript material in the British Library (Add. Mss. 30,960–30,962), and from this material the Dibdin scholar David Chandler has been able to recreate The Wags as it was originally performed. This has been recorded with an appropriate 1801 Broadwood piano. The CD release from Retrospect Opera contains a complete edited text of The Wags and introductory essays by Chandler and John Cunningham. There is also a YouTube version.

Sometimes Dibdin would present a truncated version of his full-length Table Entertainment and follow it with a separate “afterpiece.” Retrospect Opera has also recorded one of these afterpieces, Christmas Gambols (1795), which has a strong seasonal theme and offers, in fact, the fullest picture we have of an eighteenth-century Christmas.