The following is by Antje Becker and was first published in a longer form in Dossier Forschung der Staatsbibliothek Preußischer Kulturbesitz. It is reprinted here with kind permission.

Albert Louis Frédéric Baptiste (also spelled Batiste or Battista) was born in July 1700 in Oettingen (Bavaria). His father, Johann, was from France and had been a dancer and violinist at the Opéra de Paris. Albert Louis Frédéric grew up surrounded by the arts and was taught dance and probably also violin by his father. In 1718, multiyear travels took him to France, Italy, England, but also to Spain, Denmark, and Sweden: in short, to “all countries of Europe except for Poland and Russia,” as lexicographer Ernst Ludwig Gerber once put it. Eight years later, he returned to his homeland and started a position in Kassel as a court musician and dancer, which he kept until his death.

The fact that Albert Louis Frédéric Baptiste was not only a musician and dancer but also a composer was common for the time. The sources imply a number of instrumental works from his quill, but only a few of them have survived. 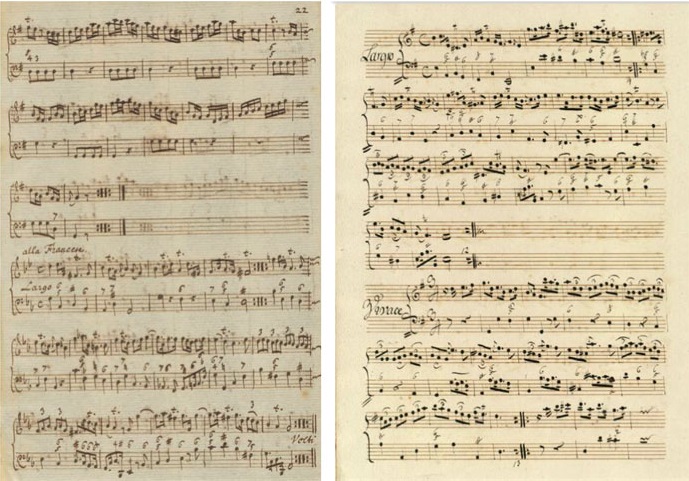 On the left is the third movement from the Sonata no. 6 in G major from the autograph manuscript in Berlin; this movement is in G minor. On the right is the same movement in a copy preserved in Copenhagen; it (besides lacking the indication ““alla Francese” as in the autograph) is in E minor. From “VI Sonate da Camera à Flauto Traverso, Ò Violino solo, è Cembalo, ò Violloncello” op. 2 by Albert Louis Frédéric Baptiste.

The VI Sonate da Camera à Flauto Traverso, Ò Violino solo, è Cembalo, ò Violloncello, dedicated to Count Johann Karl Friedrich von Oettingen-Wallerstein, are preserved in the Staatsbibliothek zu Berlin in an autograph manuscript that shows particular precision and tidiness (RISM ID no. 464120058. They are therefore an important piece of evidence of his creative work. Since the dedicatee died in 1744, we may assume that the sonatas were correspondingly written prior to this date. For the most part they are written in keys that can be comfortably played on the transverse flute as well as on the violin: D major, G, major, E minor, A minor; the sonatas in D minor and G minor are certainly among the loveliest in the volume.

Baptiste’s music shows the Italian and French influences that he was rooted in, especially as a dancer. Interestingly, the Royal Library in Copenhagen possesses a manuscript copy of Baptiste’s op. 2 that shows some modifications pertaining to performance and articulation indications as well as the notes themselves. One of the movements was even transcribed into a different key, with far-reaching consequences for the feeling of the piece: the original G minor was one of the era’s most “tragic” keys.

The Staatsbibliothek sonatas, which find themselves at the intersection of scholarship, artistic practice, and instruction, were recorded on CD this past summer and thereby made available as an acoustic experience for a broader public.