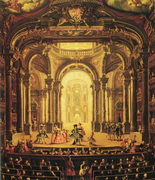 He is one of many musicians whose lives will be celebrated this year, as January 28 is the 250th anniversary of his death. Feo is a distinguished representative of the Neapolitan school from the first half of the 18th century. His name is often dropped in connection with Giovanni Battista Pergolesi, Leonardo Leo, and Francesco Durante. His compositional oeuvre encompasses predominantly church music of all genres, as well as approximately 20 operas and several arias, duets, and trios.

The relatively straightforward body of Feo literature has been enriched by two interesting recordings in the past few years:

The catalogue of the Italian National Library Service (Istituto Centrale per il Catalogo Unico delle biblioteche italiane e per le informazioni bibliografiche) has over 200 records of works by Francesco Feo. This catalogue shows that some libraries hold materials and documents not yet cataloged in RISM, such as the numerous Feo autographs held by the Archivio musicale della Congregazione dell’Oratorio in Neapel (I-Nf).

Francesco Feo’s works were not published individually during his lifetime, and therefore none are listed in RISM A/I. Only printed compositions appearing in collections are documented. Just three publications from the 18th century appear in RISM B/II:

There are about 170 entries for Feo manuscripts in the RISM online catalogue. The manuscript of the Dies irae and Parant arma from 1868 (see RISM number 455022884) from the Bavarian State Library Munich (Bayerischen Staatsbibliothek München; D-Mbs Mus.ms. 4242) is also available online.

Johann Friedrich Reichardt praises Francesco Feo as one of the greatest Italian composers and places him on a level with Bach and Handel. This judgment has since been partially qualified by musicologists: “A basic study that could allow for a definitive assessment of his output still remains to be seen.” (Beatrice Barazzoni, “Francesco Feo,” in MGG, 2nd ed., vol. 6, col. 962, Kassel 2001)

The compositions of Francesco Feo are among the rich treasures of Neapolitan music and deserve to be discovered and recognized this year.