The Opera 'Orazio' by Pietro Auletta and its Transformation 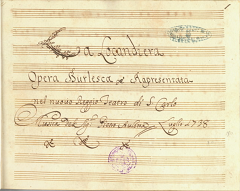 Two-hundred and fifty years ago—sometime in September 1771—the composer Pietro Auletta died in Naples. Little is known about his youth and education. Even his date of birth is disputed, ranging from April 1693 or February 1694 in S. Angelo a Scala (Avellino) to 1698.

Concrete biographical facts about Auletta are only known beginning with his marriage to Anna Biancone in 1722. Auletta was maestro di cappella at the major church S.  Maria la Nova starting in 1724. In 1725, he appeared for the first time as a composer with the opera buffa Il trionfo dell’amore for the Teatro Nuovo. This was followed by numerous comic operas until 1740, including La locandiera, which Auletta composed for the marriage celebrations of Queen Maria Amalia and King Carlos III of Spain in 1738 in Naples.

The opera Orazio, first performed in 1737, was changed and expanded with nearly every subsequent performance in and outside of Italy to the point where it ended up being a true pasticcio. Some favorite numbers by Auletta were kept but many bits by other composers, like Leonardo Leo, Giovanni Battista Pescetti, Giovanni Battista Pergolesi, Giuseppe Maria Orlandini, and Domingo Terradellas, were added. These different versions led to the opera being ascribed to different composers for some performances: the libretto for the Venice run in fall 1743 at the Teatro S. Moisè bore the names of Gaetano Latilla and Pergolesi, while the libretto for Brussels performances in 1739 was by Baldassare Galuppi. A version of Orazio was then performed as the intermezzo Il Maestro di musica in 1752 in Paris and published there under Pergolesi’s name in 1753.

More research is needed on Pietro Auletta’s works, which mostly consist of operas and only a few sacred pieces. The remarks by Frank Walker in “Orazio: The history of a pasticcio” in The Musical Quarterly (vol. 38, 1952, p. 369-383) offer a good base for further studies on the different pasticcios by Auletta and other composers who were involved.