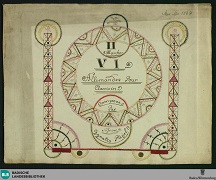 The Badische Landesbibliothek in Karlsruhe has completed a massive project to catalog all notated music in its collections. A report of this undertaking by Julia von Hiller was originally published on the BLBlog. The portions mentioning RISM are summarized here; for the full version, please switch to the German page (published with kind permission).

The years 2001‒2010 were the years of the Karlsruhe music manuscripts. Apart from extensive destruction in 1942, including serious music losses, our library has been able to preserve large portions of its important collection of 18th-century manuscripts from the Baden court. This includes the collection of the longtime Baden court Kapellmeister Johann Melchior Molter, whose works are, with few exceptions, only preserved here. In many cases the compositions are unica and reveal a remarkable level of musical activities in Karlsruhe. As part of an international project to document written musical sources, Dr. Armin Brinzing from the German working group of the Répertoire International des Sources Musicales (RISM) cataloged the 1,437 manuscripts for the BLB. These can easily be found in the RISM database.

The RISM cataloging work also encompassed the collections from the court library related to musicians, including Vinzenz Lachner, Clara Faisst, and Margarete Schweikert.

The Donaueschingen music manuscripts were in RISM even before they were acquired by the State of Baden-Württemberg. The collection, with its 3,612 manuscripts, is much more comprehensive and in some respects more significant than the Karlsruhe court library. The items that came to us in 1999 but weren’t yet in RISM were kindly added to the database by the Munich RISM team in 2011. In addition, Dr. Gottfried Heinz-Kronberger cataloged 90 music manuscripts for RISM in August 2014 that had been added to the Karlsruhe collection. He also cataloged the 251 music manuscripts from the palace library of Baden-Baden for us in 2016/17. The Johann Wenzel Kalliwoda Collection, with 169 manuscripts, was handed over to Munich for cataloging in 2019.

Once all of our older music manuscripts from the court libraries had been cataloged, only twelve of our newer archival collections remained, a total of 1,063 shelfmarks. In accordance with RISM Germany’s policies, materials from the 20th century are not cataloged by them since too much older material from the catacombs of libraries worldwide has not been cataloged and has priority. But this gave us the wonderful opportunity to fill the RISM database ourselves from here in Karlsruhe. Almut Ochsmann, M.A., cataloged these archival collections for RISM in 2019/20. The addition of media art, electro-acoustic compositions, and multimedia pieces led to completely new kinds of works in RISM.

I would like to thank the RISM team in Munich for their fantastic collaboration, and congratulate Janina Späth and her team of experts, who are actually only “part-time” catalogers, for their wonderful work. Now we will dive into processing our collection of maps. But more on that later.