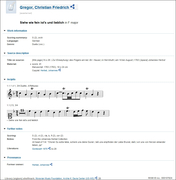 Sometimes libraries have their manuscripts cataloged in the RISM database but these records are not in the library’s local catalog. Did you know you can download your RISM records and import them into your library’s OPAC?

The Moravian Music Foundation (MMF) did just this for over 900 records that were previously only in the RISM database. The MMF, with a location in Winston-Salem, North Carolina and one in Bethlehem, Pennsylvania, is home to one of the most important collections of 18th- and 19th-century music in the United States. The historical holdings have their origins in the earliest settlements of members of the Moravian Church in the American colonies, dating from as early as 1740. Over 10,000 items are preserved today. The collection consists of music by Moravian composers but is also rich in sources by European composers, some unique to the MMF. Composers include the Bach sons, Hasse, Stamitz, and Haydn.

The MMF’s project involved RISM records from the Johannes Herbst Collection. Herbst (1735-1812) was a Moravian minister who copied out and collected music in his native Germany as well as in America, where he worked and lived until his death. The collection is well preserved and forms one of the MMF’s core historical collections. Now, the records are in the MMF’s local catalog, GemeinKat, through OCLC’s Discovery interface and in turn searchable in WorldCat. This is part of a three-year project at the MMF to convert data in card catalogs to an online catalog.

How did they do it? The process was described by David Blum in an article in a recent issue of Fontes Artis Musicae:

First, the RISM records were downloaded by the MMF. RISM records are freely available to download and reuse under a Creative Commons (CC-BY) license. The entire RISM dataset can be found as open data and linked open data on the online catalog’s Open Data Service page. In addition, an SRU (Search/Retrieve via URL) server is also available to download a specific dataset, such as records from a single library.

After being downloaded from RISM, the records were edited before being uploaded into OCLC. During the editing phase, the RISM records were made RDA compliant and a link back to RISM was added. Work was required to edit fixed data fields, subfields, and diacritics. A constant data record was applied to each record to facilitate the editing process. The specific fields that required attention are named in the article.

The original RISM records had been entered by the US RISM office at the Harvard University Library and drew on Marilyn Gombosi’s Catalog of the Johannes Herbst Collection, which was published in 1970. New research on this repertoire has emerged since then, and the MMF was able to enhance the RISM records with new and sometimes corrected information. The MMF also added additional subject headings, church festivals, and scripture references; identified authors of hymn texts; and provided notes concerning the context and dating of the composition.

At RISM, we are of course interested in improving our own database by including the new information uncovered by the catalogers at the Moravian Music Foundation. The MMF has sent us their enhanced records and we are working on integrating the added information into our records. David Blum will report more about this project at the IAML Congress in Leipzig.