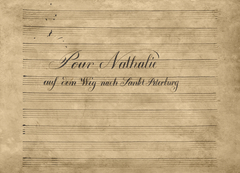 A recently discovered music manuscript dating from the early 19th century has musicologists from all over the world speculating whether they are one step closer to finding out the true identity of the dedicatee of Ludwig van Beethoven’s famous bagatelle Für Elise.

The previously unknown piece, written for organ and accordion, was discovered at the beginning of the year in a church in the northern German port city of Kiel. Musicologists part of an interdisciplinary team investigating the historical Kuneus-Gesellschaft für Seenotrettung vom Delphin (Kuneus Society for Maritime Rescue by Dolphins, or KuGeSeDe) were in the Parish Church of St. Ausonia (RISM library siglum: D-KIaus) when they made a surprising discovery.

In a tattered box behind the organ, they found a music manuscript dated “1801” that bears the title “Pour Nathalie | auf dem Weg nach Sankt Peterburg” (see image), ascribed at the end to Nikolaus Kuneus, the namesake of KuGeSeDe. Up to this point, it was not known that Kuneus had also composed. This piece, which has already been cataloged in the RISM database (RISM ID no. 1001106374), bears a striking resemblance to Beethoven’s Für Elise, which was written less than ten years later.

“The Beethoven connection immediately becomes clear as soon as you look at the opening notes,” musicologist Adelheid Hoek told the Kieler Tagesblatt recently. “If you take the notes and just play a rough inversion, then you have the basic outline for the Für Elise melody,” she added.

Hoek’s colleague Reimar Lyne speculated that “Beethoven must have seen this manuscript, perhaps during Kiel organist G. C. Apel’s well-known travels to Vienna, and simply changed the melodic direction, translated the title from French to German, and used just a slightly different name. Well, and Beethoven dropped the accordion bit.”

Project cataloger Raban Sincker explained: “That Beethoven’s iconic Für Elise is essentially an adaptation of pre-existing material is causing us to look closer at Kuneus’s dedicatee, this ‘Nathalie,’ who is in all probability the ‘real’ Elise.” He stated further that the “timing of this discovery in the 2020 Beethoven Year couldn’t be better.”

Research in the St. Ausonia church archives has shown that Kuneus was active in Kiel by 1782, having previously studied organ and theology in Freiburg im Breisgau. In Kiel, he played organ at St. Ausonia but then became a sailor around 1791. Ship manifests in the Kiel City Archives reveal frequent travel between Kiel and St. Petersburg, where he was more than once accompanied by a “Nathalie S.,” about whom almost nothing is known. Traces of Kuneus’s professional activities thin out after 1820, but mentions of him in regional newspapers can be found in notices for musical salons in the Odenwald region of central Germany. Pour Nahtalie appears to be Kuneus’s only composition.