Yet another misattributed (and rediscovered) Vivaldi work in Dresden 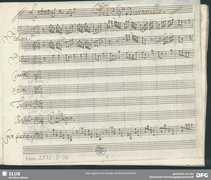 The following is a guest post by Michael Talbot (University of Liverpool, Department of Music, Emeritus):

Regular Dresden-watchers will be aware of the ambitious project “Die Notenbestände der Dresdner Hofkirche und der Königlichen Privat-Musikaliensammlung aus der Zeit der sächsisch-polnischen Union” supported by the Deutsche Forschungsgemeinschaft (DFG), which was brought to a successful conclusion in 2016. This project was unusual in being not only a “mass” digitization programme but also a vast exercise in analytical cataloguing that supplied for every item a detailed bibliographical description including, wherever possible, a watermark ID and a scribe ID. It enables visitors to the RISM portal, by means of a single click, to isolate and consider as a potentially significant group all the manuscripts belonging to this corpus that share a watermark and/or a scribe. In the majority of instances, applying these filters produces no great revelations, but since the process of calling up these lists and (if the incipits provoke further investigation) accessing digital reproductions of the sources is so unbelievably swift – one would have to spend hours, and perhaps overtax the patience of busy library staff, to do the equivalent in situ – one is encouraged to move into “What if …?” mode and test out hypotheses that within actual library walls would nearly always appear too precarious and time-consuming to pursue.

Students of Vivaldi have been made aware since the early 1990s of a group of uniquely preserved psalm settings belonging to the former Hofkirche repertory today held by the SLUB (D-Dl) that are attributed on their manuscripts to Galuppi but can be shown through concordant musical material plus stylistic and structural factors to be in reality by Vivaldi, from his late (post-1730) period. In 1992 the Beatus vir RV 795 emerged; in 2003, a Nisi Dominus; in 2006, a Dixit Dominus and a Lauda Jerusalem. Then the trail went cold – which is to say that, in this not yet fully digital age, no one was motivated, or had the practical opportunity, to comb this repertory thoroughly enough to come up with further works of the same provenance.

It was known from the early years of the present millennium that all four of the misattributed works originated from the prominent Venetian music copying shop of Iseppo Baldan, an astute but rather unethical proprietor whom Haydn scholars had earlier revealed to be guilty on occasion of presumably deliberate misattributions. A likely rationale for Baldan’s substitution of Galuppi’s name for Vivaldi’s soon presented itself: in the late 1750s or very early 1760s Baldan had evidently been commissioned to supply to the Saxon-Polish court, perhaps at very short notice, a great quantity of up-to-date sacred vocal music, primarily by Galuppi, and found himself short of the necessary liturgical items by the desired composer. So he cut corners and co-opted settings by other composers that he happened to have handy in his stockroom (the Vivaldi pieces could well have come to him via two of that composer’s nephews, who were his employees for a time).

In mid-March 2017 I had what Germans call an Einfall (there is no adequate English word, although “sudden inspiration” gets the gist). It occurred to me that if all four of the above-mentioned works were wholly in Baldan’s hand (which would seem probable if he wished to conceal his fraudulent behaviour from his assistants), they might also be written on the same paper type as determined by the watermarks. If so, filtering first by scribe and then by paper type might produce a hit list moderate enough in length to be quickly searchable for any additional Vivaldi works previously missed. I quickly verified from RISM that the scribe (Baldan) and the paper type (coded W-Dl-428) were not only common to the four manuscripts but also largely coterminous within the wider repertory. So I entered the search term “W-Dl-428” to see what this single, powerful filter would throw up. The result was a group of 56 compositions, all except three of them sacred, and nearly all bearing the name of Galuppi. In the top right-hand corner of the screen, for all relevant cases, stood a welcoming button linking to the digitized scores.

After that, the task moved on to inspecting incipits. Those that looked un-Galuppian or potentially Vivaldian led to a consultation of the digitized source itself. In about an hour and a half I had been through the entire list. Only one work not already identified as by Vivaldi looked Vivaldian, but one was already enough. This was a single-movement Laetatus sum in C major for SATB choir and strings attributed in the score to Galuppi (under his sobriquet “Buranello”). Its shelfmark was Mus. 2973-D-36, and its RISM ID. no. was 212006095. [The correct attribution to Vivaldi will be visible after the catalog update at the end of the month–Ed.]

The more I looked at this score, the more it continued to scream “Vivaldi” at me. From that point onwards, the process of constructing a strong argument for Vivaldi’s authorship took over. Earlier scholars had said very little about the work, although Ines Burde’s fairly recently published doctoral thesis on Galuppi (2008) had presciently relegated it to the Anhang. I attacked the question of authorship on many fronts. I identified several short musical concordances within Vivaldi’s music, a host of idiosyncratic stylistic features characteristic of him (to give just one example: the synchronous arpeggiation by two or more stringed instruments of a dissonant “five-four” chord) and even some notational peculiarities taken over by Baldan from what was presumably an autograph manuscript of the composer.

I then proposed the Laetatus sum as a new item for the Vivaldi catalogue to my colleagues on the Editorial Committee of the Critical Edition of Vivaldi’s works published for the Istituto Italiano Antonio Vivaldi by Casa Ricordi. As attachments I sent them a PDF of the source, my transcription of it and a detailed argument for its acceptance. With hours the first responses started to come back, all positive. Almost as swift was the issue of an RV number for it: RV 827.

As things now stand, in mid-April 2017, an edition of this new Laetatus sum (there is a similarly scored setting in F major of the same psalm, RV 607, already in the Vivaldi catalogue) is being fast-tracked to publication. It is an attractive work, slightly longer and more complex in form than other works of the same type in Vivaldi’s oeuvre, and is likely to receive a degree of exposure in live performance and recording in the fairly near future. I have also written an article on the new discovery, which is scheduled for publication in 2017 or 2018 in the yearbook Studi vivaldiani (PDF versions of current volumes and back numbers of this journal are accessible without cost through the web site of the Fondazione Giorgio Cini).

I am confident that what I have been able to do in this individual instance will in coming years find its counterparts, in connection with quite different composers, in studies of the same Hofkirche repertory. I should also mention, as a concluding flourish, that this discovery has prompted me to consider a further hypothesis of much broader import: that the “Baldan consignment” (or series of consignments), executed around 1760, was originally sent to the Saxon-Polish court not in its normal seat at Dresden, but in its place of refuge during the Seven Years’ War (1756–1763), Warsaw. The reason why the Galuppi-attributed works were so numerous and so comprehensive liturgically could have been because they were designed to create an entire performing repertory from scratch (in the Polish capital) rather than merely to update an already existing one (in the Saxon capital). Since this idea occurred to me, I have learnt that it has been in the minds of at least two other scholars, so one can expect future developments on this front as well. A tangible Polish connection in addition to the known German one would appeal to me in the light of the growing interest shown by modern Polish musicians and musicologists in the repertory belonging to the period of the Wettin monarchs.