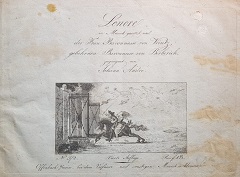 We know that plate and publisher numbers are especially helpful when dating the music editions of many publishers from the 18th and 19th centuries.

RISM’s A/I volumes, which documented printed music by a single composer, had very few editions from the Offenbach publisher Johann André that were dated. (One of the exceptions was the editions by Ignaz Pleyel, which were dated using the thematic catalog by Rita Benton.). Thanks to an André bibliography by Wolfgang Matthäus (short title in RISM: MatthäusA 1973), it has been possible to date all of this publisher’s editions in the RISM catalog up to plate number 1400.

Matthäus selected the year 1800 as a stopping point for his study because it was a very decisive one in the publisher’s history. In 1799, the firm’s founder, Johann André, died and his son, Johann Anton André, took over the business. Soon after, as we know, the first lithographed editions were printed with the help of Alois Senefelder; prior to this, all editions by André had been engraved, many of them with small illustrations and decorative elements on the title pages. It is worth taking a look at a few digitized André editions in the RISM catalog (which you can find by clicking on “Digitized sources” on the left).

During this very time of transition, the Mozart archive was bought from the composer’s widow Constanze and previously unpublished editions were issued. Even prior to this, André had published various Mozart first editions (see HaberkampE 1986). How did Matthäus manage to date so many editions so precisely? He used advertisements placed by André’s commissioning agents in newspapers such as the Frankfurter Staatsristretto.

But just because we’ve reached 1800 doesn’t mean we are done dating the André editions in RISM. Luckily Britta Constapel took up the cause with her bibliography (ConstapelA 1998 in RISM) and continued the catalog to plate number 6400 (ca. 1840). It is not as detailed as Matthäus, who includes many complete title transcriptions and remarks about reprints, etc. 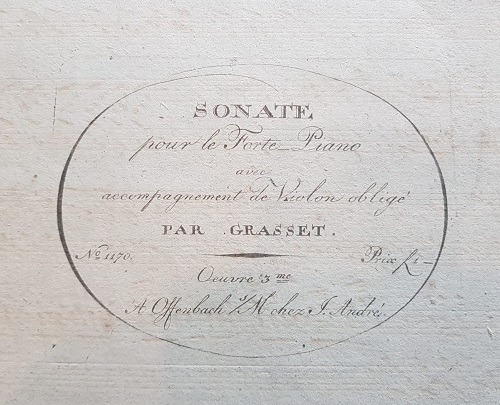 And here is an insider tip: if you happen to have a printed edition and can’t identify the publisher because the title page is missing, look to see whether the plate number is on the right edge at the bottom of the page, below the music. If you’re lucky, that could be a clue that it is an André edition.