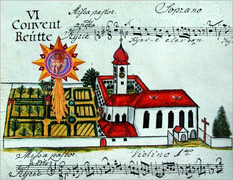 A Christmas concert with musicfrom the archives of the Franciscan Monastery Reutte/Tyrol.

The 22nd Tyrolean Christmas Concert will again be rooted in the idea of recreating a mood-filled Midnight Mass in 19th-century style utilizing Christmas music from Tyrol.

The focus is on the lovely Christmas Mass by Stefan Stocker, which was handed down through a manuscript from ca. 1840, located in the music archives of the Franciscan Monastery in Reutte, Tyrol, and written by P. Mauritius Gasteiger, OFM (1782 Schwaz – Reutte 1865). The Cantilena pastoritia by the Neustift Augustinian Canon Wilhelm Lechleitner, Come All and Hasten to Bethlehem, was found in a copy from ca. 1820, written by P. Moritz Gasteiger in Reutte. We are grateful to Provincial Archivist P. Mag. Oliver Ruggenthaler, OFM for the initial leads to the music materials in the archives of the Franciscan Monastery in Reutte, and thereafter their indexing, thereby also giving us the opportunity to perform all of these pieces, as we did at the Tyrolean Christmas Concert in 2008. Over 2,000 records of music from the Franciscan Monastery in Reutte are listed in the RISM database.